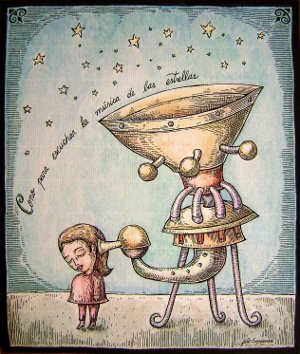 Cone to listen to the Music of Stars.

The Kepler spacecraft (launched in March 2009) is the space-based observatory of NASA's Kepler Mission -named after Johannes Kepler, the 17th-century astronomer. The goal of this mission is the discovering of Earth-like planets orbiting other stars. The spacecraft's photometers point to a star-enriched region in the constellations of Cygnus, Lyra and Draco. The detection of extra solar planets is a challenging task because the blinding brightness of stars prevents a direct observation of any orbiting planet, even more when the planet is as small as Earth.

Instead, the method used by the Kepler spacecraft involves the detection of the very slight reduction of the apparent star brightness that occurs when a planet transits between the star and Earth. However, this transit method can not be applied to stars whose magnitude changes intrinsically over time (variable stars). In fact, in an early stage of the mission (October, 2009) about 8,500 stars where cataloged as variable and dropped from the list of potential targets (a list comprising around 150,000 stars). The actual light curves for the dropped list can be obtained by filling this query form with the following fields:

The irregular but fluctuating shape of many of these curves, together with its notable degree of smoothness, reminds that of the melograms (sound pitch curves) that we studied in collaboration with Musicologist Teresa Ruiz-Coll in a work about vocal microtonality. This happened with so many examples within the set of variable stars that the potential implications for musical composition could not be avoided. What about translating these curves into sound? Since these curves display the change in brightness along a time period of almost 10 days, the translation could be made in a very direct way: time was compressed (one day of measure was converted into one second of sound), and the pitch of the sound was made proportional to the brightness values. Thus, light curves were converted into melograms, which could be ultimately converted into sound, as we did in our musicological studies.

Finally, the sounds where placed in a zoomable sky map displaying the region surveyed by the Kepler spacecraft (a gnomonic projection centered on RA: 19h 20m, Dec: +45°). Google Map API was customized using background stellar charts computed with Your Sky.

There are precedents of using astronomical data for musical purposes, but in many cases the data should be exhaustively manipulated to produce an interesting musical result. In the case of the Kepler measurements, the musical content of the data was almost direct: we only needed to convert brightness into pitch, and compress the time!